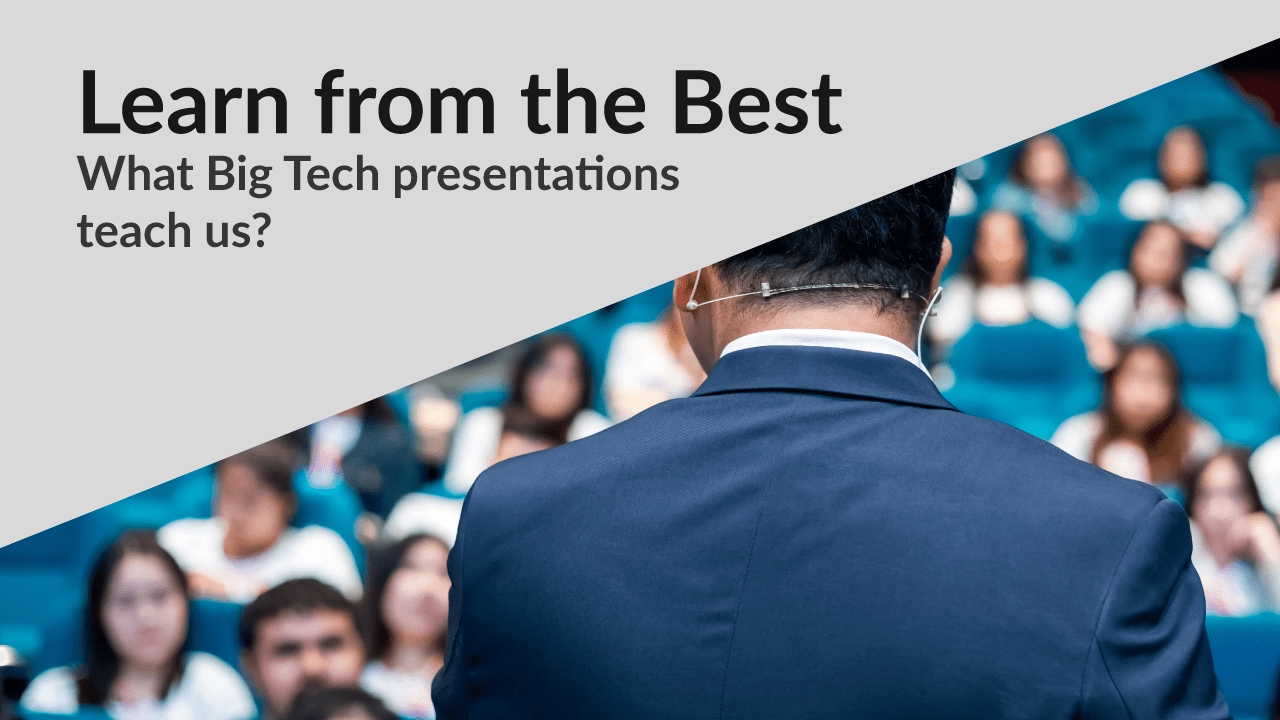 Some presentations are more important than others. When Big Tech CEOs are about to give a worldwide presentation to launch their new product or announce their latest project, they know a lot is at stake. Indeed, a poor performance could mean conveying a negative image of the company and therefore losing some clients and money: one slight mistake could mean million-dollar losses.

Risks might not be so high in the case of your public speeches and professional presentations; however, we all want to project the best version of ourselves to others in order to transmit trust and reliability. This is the way we convince coworkers and clients to approve our projects and close business deals.

We have a lot to learn from the presentations given by CEOs of the Tech Giants, sometimes called the Big 5 or the GAFAM group in non-English-speaking countries. This acronym refers to the first letter of each corporation: Google (now Alphabet), Amazon, Facebook (now Meta), Apple, and Microsoft. In this article, we will get inspiration from these huge IT companies and how their leaders perform in their public appearances. We will also see that mistakes do occur even to the best: there is no such thing as a perfect presentation!

Always remember that a 15-minute presentation can actually change your life. In order to be prepared, learning from the best is key. Now let’s take a peek at the presentation styles and techniques of the former and current most powerful CEOs on the planet and get some inspiration from it!

We can call Larry Page a great visionary, a determined leader, and a business genius but definitely not an excellent public speaker. People have described his tone of voice as flat, quiet, robotic, emotionless, and even froggy! Nonetheless, he manages to convey his ideas in his own style. First, he may not be overenthusiastic but his calm voice resounds in the public’s minds. He also uses his hands to reinforce his message and most importantly, he smiles: this is his own way to transmit his passion. This might not work for politics but it functions perfectly to convey deep, innovative ideas.

Of course, he always gets some help from his visual aids: he generally shares relevant images and videos of what Google has in store for us. Just like Larry Page, you have to find your own style: you don’t have to be the life of the party to convince a large audience!

The ex-CEO and now executive chairman of Amazon is considered as one of the most skilled corporate leaders in terms of public speaking. He both attracts his audience’s attention and inspires respect and confidence. How does he do it? First, he has a low-pitched, calm, clear, confident, and potent voice. He knows when to make pauses, especially before delivering an important message. Besides, he is not afraid to use large expressive gestures when he wants to emphasize his message. He usually moves slowly on stage, taking a few steps and standing still again to face the audience when concluding on an important idea. Eye contact is also important: you cannot look personally in the eyes of a thousand people, but you can pretend that you do by moving your gaze everywhere in the room. If you have a smaller audience, maintaining eye contact with everyone will make them feel important and involved.

These simple tricks might look simple on paper, but they can take years to master if you are not a natural-born public speaker. You’ll have to work on your voice, gestures, movements, and eye contact: this means you should practice, record yourself and become more self-aware.

Mark Zuckerberg (Facebook, now Meta): conquer your fears, one step at a time!

Mark Zuckerberg is the living epitome of what perseverance and practice can achieve. Indeed, Facebook’s creator and CEO struggled for a long time during his public appearances. His nervousness used to perspire through his monotonous voice and hesitations, as well as his gestures which showed uneasiness. He also tended to use a lot of gap-fillers such as er, um, or like, which can be off-putting when used too often.

Little by little, he started using hand gestures, which led him to speak with more confidence and calm, making the right pauses at the right time in order to stress his main ideas. Besides, he started changing his voice pitch to keep the audience hooked. Take a look at one of Zuckerberg’s recent speeches or interviews and you will see the tremendous change from his early public appearances. You can also become a confident public speaker but remember it takes time and practice!

Steve Jobs (Apple): turn your presentation into a show!

When Steve Jobs presented himself in front of an audience, it was not a corporate presentation, it was a show! People attended Apple’s CEO’s new announcements as if they were going to a Hollywood blockbuster movie premiere.

There are a few lessons we can draw from his legendary speeches. First, focusing on a simple, strong message is better than going into too much detail. He tended to use simple words such as great or amazing, and also slogans and catchphrases such as “Music, calls and Internet” when he presented the iPhone. Second, create and tell a story: get rid of boring numbers and forgettable facts. Instead, you should narrate a story that everyone can relate to. That is why Jobs almost never talked about his products but rather about the experiences you can get from them. Once, somebody brought him an office envelope while he was on stage. What was in it? the new Macbook Air. That’s how you create a show.

Bill Gates (Microsoft): use all the tools and mix the techniques!

The former CEO of Microsoft is not a natural-born public speaker. Just like Zuckerberg, he had to learn the skill. But look at him now! He knows how to use a lot of convincing tools and techniques to captivate audiences. He catches their attention from the start with a powerful memorable statement or an intriguing question. Zuckerberg also uses very few slides but with meaningful words or images. He smiles and shows enthusiasm. He knows when to use gestures and when to make a pause. Finally, he tells personal stories (sometimes funny, sometimes deep, always meaningful) that people can emotionally relate to.

You too should be able to find your own presentation style by learning and using all the tips and techniques that will lead you to better public presentations. Learn from the best and become one of the best!

That’s it! We hope you will find these tips helpful. We wish you the best of luck on your next presentation.

© Copyright 2022 Ofeex | PRESENTATIONGO® is a registered trademark | All rights reserved.